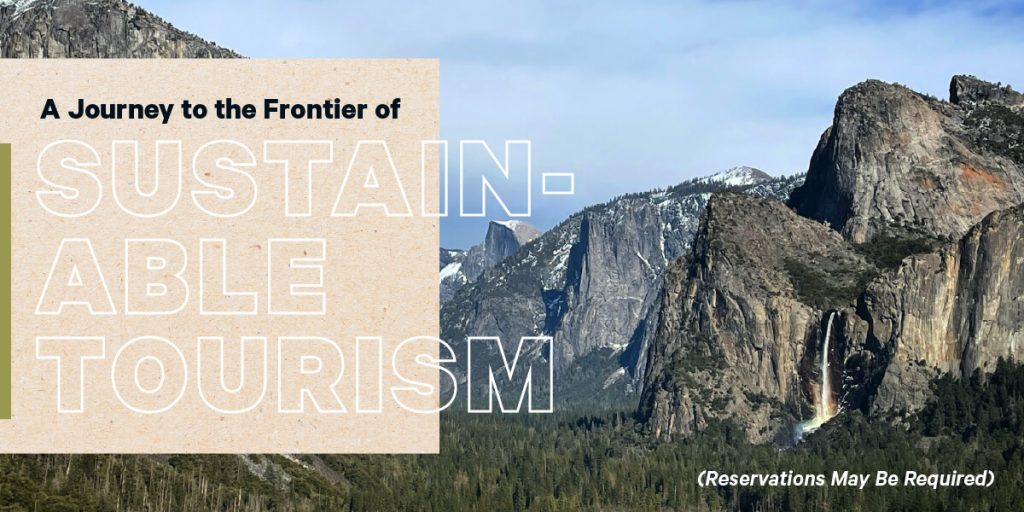 Working on an advertising campaign for Yosemite is a creative’s wildest dream come true. The granite walls of the national park are hallowed ground for generations of outdoor lovers. There’s enough skyscraping rock, rich history and jaw-dropping natural beauty within the national park for decades of stunning creative campaigns.

The Abbi Agency got this dream opportunity recently. To say the entire team was ecstatic about the chance to work on a Yosemite campaign is a dramatic understatement. But the incredible assignment came with a twist that made it even more interesting.

To put it mildly, Yosemite is popular. The advertising campaigns we imagine in our minds — drool-worthy destination imagery and copy that send travelers scrambling to book a trip — are essentially a thing of the past for places like Yosemite. In their place is an even more compelling challenge — an assignment that requires clear-eyed strategy, razor-sharp messaging and an appeal to a new traveling mindset in a transformed travel world.

Yosemite was instituting a peak season reservation system for entry to the park and we were tasked with letting everyone know about it. Not an easy task, but an essential one in today’s world. The “why” was our savior — the fact that the reservation system was enacted to preserve the park’s majestic natural landscape and the visitor experience that makes it one of the world’s most prized outdoor destinations.

Welcome to the new era of outdoor travel marketing.

And welcome to the leaders in this effort — destinations like Yosemite that are realizing that a well-run reservation system can enhance the experience for visitors and preserve the national park’s natural beauty for generations to come.

This sea change in destination marketing has been in flux for years. But it took visionary leadership by destinations like the Yosemite Conservancy and Yosemite National Park— and a trial-run reservation system necessitated by the pandemic — to make reservations a reality.

What do you learn after months of hard work developing, launching and optimizing a critical reservation campaign for one of the world’s most iconic national parks? You learn that the frontlines of sustainable tourism require bold vision, brave choices, and an army of detailed, determined creatives and dedicated Yosemite Conservancy staff and national park employees all aligned and perfectly synchronized.

Yosemite’s new reservation system was a response to peak-season overcrowding, infrastructure projects that impacted roads and facilities, and the growing realization that summer crowds needed to be tamed. But rolling out the summer-long reservation requirement was a significant challenge. So many people love, and expect access, to Yosemite National Park that a well-orchestrated advertising, content and education campaign was critical. The stakes for making the reservation program a success were high. There were long-time park loyalists accustomed to driving up to the gate and being ushered in, new visitors unfamiliar with the new need for reservations, park employees who would have to deal with visitors unprepared for the reservation requirement — everyone was in need of a period of education, information and preparation.

The Yosemite Conservancy hired The Abbi Agency to do just that — make the reservation system understood, accepted and, dare we say, embraced by Yosemite’s diverse visitor base.

Look out into the future, and this will become an essential new frontier of travel and tourism marketing. The industry for years has been a one-track train to bookings. Every effort is focused on demand generation. More trips, more spend, more visitors.

The pandemic changed all this. Marketing went from demand generation to visitor education. Messages like what was open, what health safeguards were in place, what entry requirements had been enacted suddenly became the norm.

In many ways this communication and education phase was a test run for the state of post-pandemic travel. As the pandemic tailed off, and travel surged, responsible travel messaging took hold. This was the opposite of demand generation; it was the rise of demand management.

The Yosemite Conservancy and Yosemite National Park had devised a reservation system where 70 percent of the reservations were released for the summer in the spring, while 30 percent were held back and released as rolling, one-week-out reservations throughout the summer.

The reservation system was balanced, but required substantial marketing efforts so that people did not show up at the national park gate expecting admission. 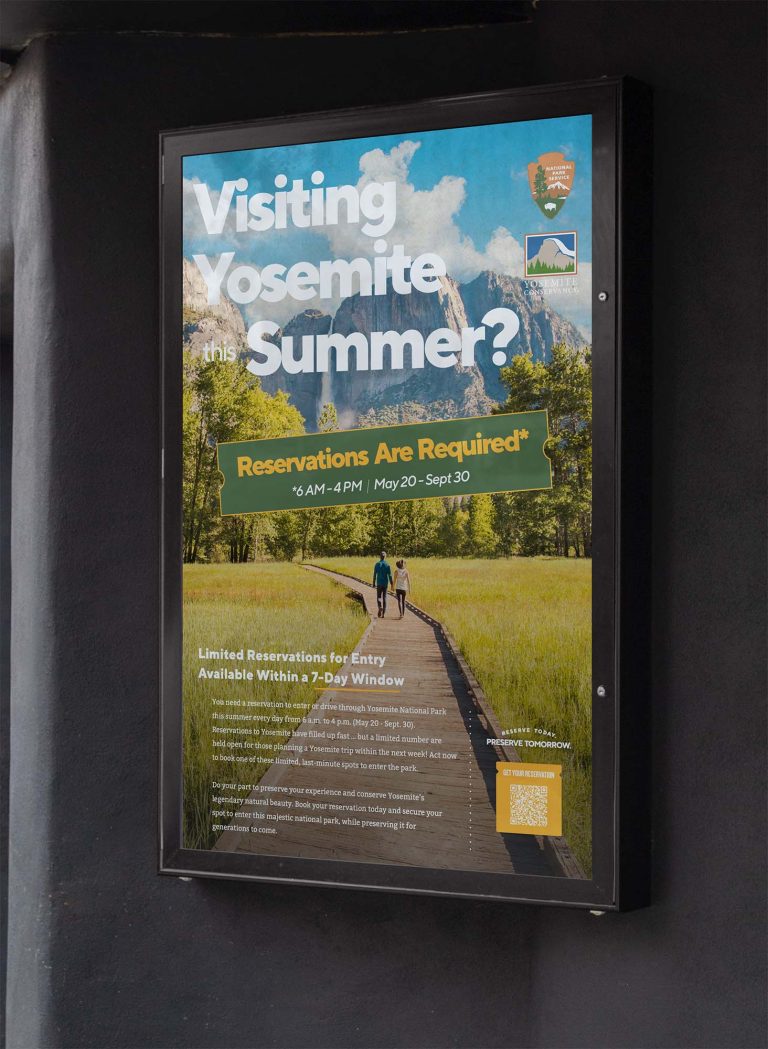 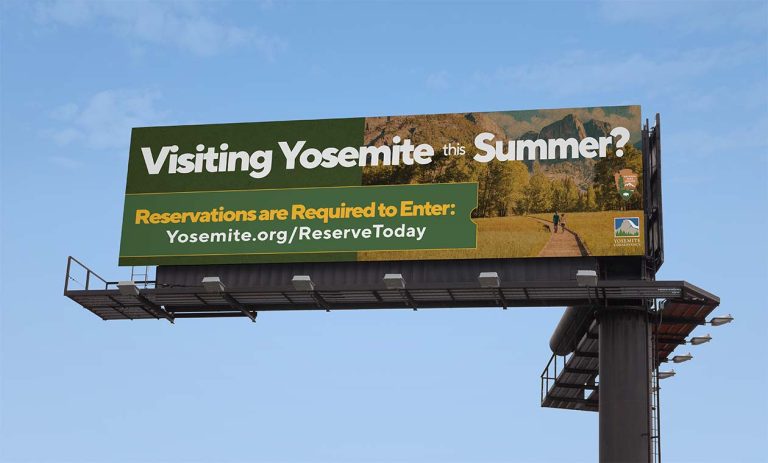 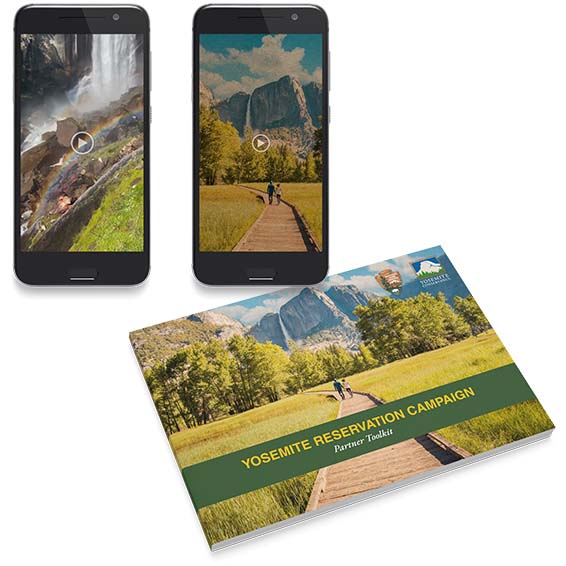 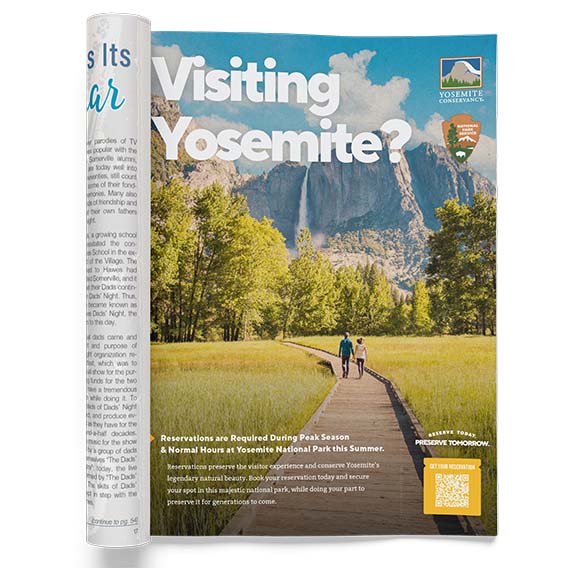 Using compelling photography and powerful, concise messaging, the campaign aligned with national park branding while carving out a look and feel of its own. Motion graphics and animations drove engagement and drew viewers in. Landing page creation drew from the campaign style to deliver a cohesive reservation experience for Yosemite visitors.

If you think Yosemite’s reservation system is a simple product of a highly popular destination bouncing back from the pandemic — a momentary anomaly that will go away as quick as it came — you might want to reconsider. The population dynamics and the increasing appeal of outdoor recreation are putting permanent pressure on national parks. National Parks received 297 million visitors in 2021, according to National Parks data. That is a staggering volume of travel. A significant number of national parks already have reservation requirements for at least some limited portions of the park, including Glacier, Arches, Zion, Shenandoah, Rocky Mountain, Acadia and Haleakala.

And caps and reservations are even spreading to other parts of the travel world. Amsterdam’s busy Schiphol Airport recently announced they would cap the number of travelers passing through the facility.

With nearly 8 billion people in the world — and an increasingly large percentage of them all wanting to see certain iconic landscapes like Yosemite at least once — the need to regulate visitor volumes will likely become more and more commonplace. 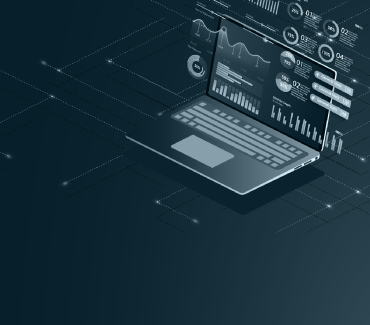 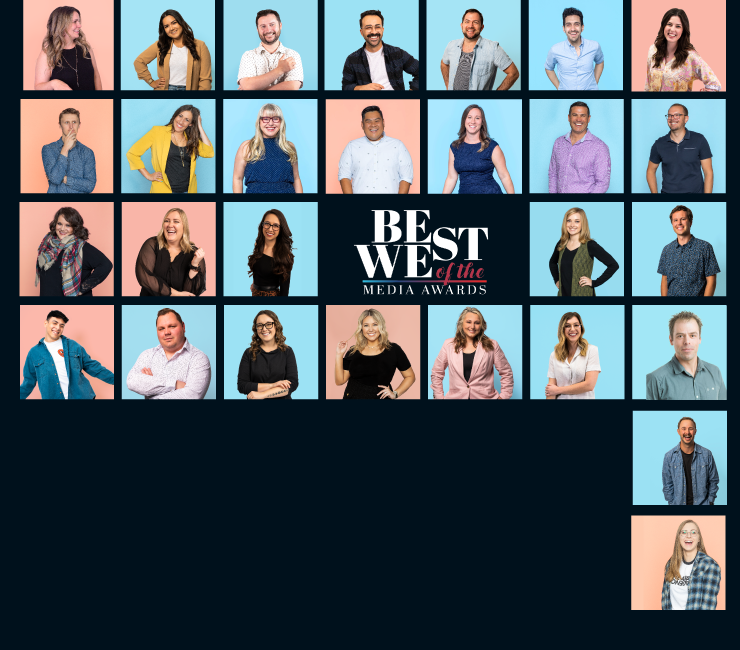